Nearly a decade ago, in early April, KLIN’s Jack Mitchell boldly proclaimed to his radio co-host Dave Miller winter was over. Dave told Jack to put his money where his mouth was. For whatever reason, Jack upped the ante by saying if any day until the end of summer had a high temperature of 60 degrees or less, he’d ‘walk across the city.’ As it turned out, a couple weeks later, a cool late April day failed to reach 60 so Jack had to pay up, walking from Lincoln North Star to Lincoln Southwest.

Since the first “Walk of Shame,” Jack has made four walks across the city when his ’60-Degree Guarantee’ failed. After failing at yet another weather prediction, this time the “65-Degree Guarantee,” Jack again pledged to walk 26.2 miles for a good cause. This year’s “Walk of Shame” was a little different. Jack live-streamed his walk from his basement as he completed the entire 26.2 miles on his treadmill. Viewers were able to follow along on KLIN.com, Facebook, and YouTube as Jack brought guests in remotely. In the end, Jack raised $2,896.20 (not including a separate, direct $1,000 donation) for the Lincoln Community Foundation’s COVID-19 Fund, took 56,361 steps, and burned 7,876 calories. 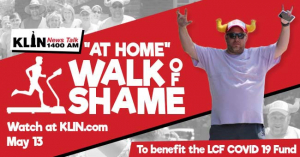 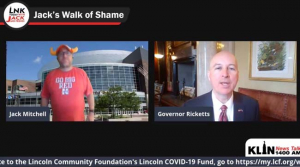 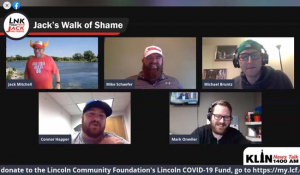